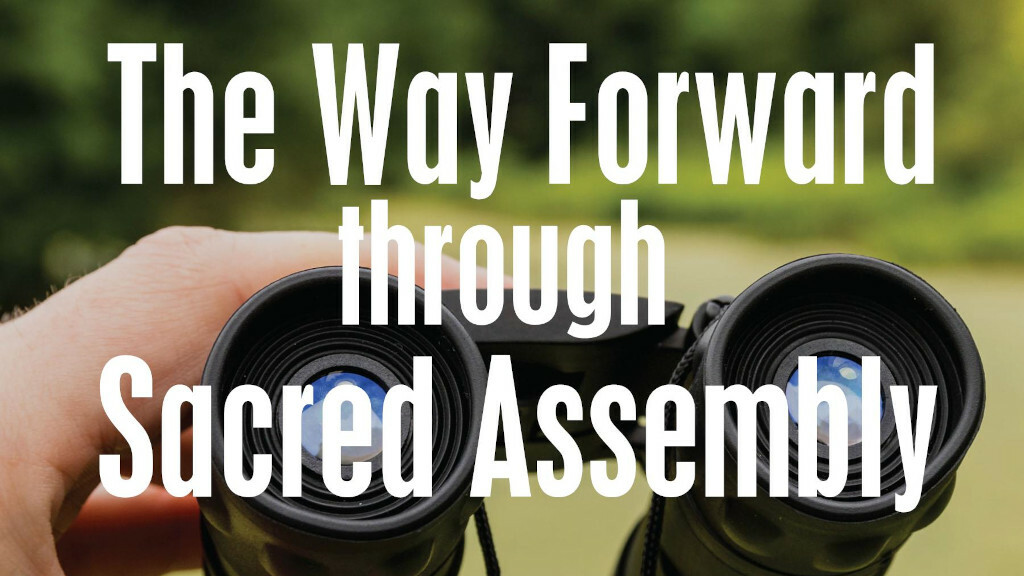 “Blow the trumpet in Zion, declare a holy fast, call a sacred assembly. Gather the people, consecrate the assembly; bring together the elders, gather the children, those nursing at the breast….” Joel 2:15-16

Amy Galloway once wrote the following in a blog post entitled Gathering with the Sacred Assembly:

In our Protestant framework, and perhaps in our American independence, confession is dealt with on an individual basis; it’s my life, my problem, and my sin. And so it is. But Scripture shows us another form of confession—the corporate confession of a community.  Everyone was called to the sacred assembly in the passage above—the priests, the servants, the bride and the bridegroom preparing to marry, and the children including the nursing infants. Clearly, God knew something significant happens when we gather together as a body, collectively expressing our repentance and need for his offering of forgiveness and peace.

The Church is not designed to be an individualistic experience. When God laid out the annual feasts for the Jewish people, they were communal celebrations of spiritual realities. The trumpet would sound to announce a gathering whether it was for a feast of thanksgiving, a feast to remember what God had done, or an assembly for fasting and repentance, and all would participate.

To me, her words ring true. Our western individualism makes somber, difficult, corporate events… well…. difficult. We’re all about corporate gatherings to celebrate. Take our national obsession with the Super Bowl. Who doesn’t love to gather for that? But conversely, it’s hard for us to embrace the need for any corporate gathering for loss or corrective action, especially here in the United States. In short, we struggle with corporate responsibility for things done wrong and we struggle with corporate grief for things that go wrong. “We’re over it,” we say when it comes to events in our past. This is especially true when it comes to trouble over which we feel we’ve had little control, or in which we had minimal (if any) participation. “Let’s move on. Life’s too short and there’s too much to do,” we think.

Sacred Assembly suggests an alternative. Whether it’s grieving some loss, facing the sin that created that loss to begin with, or celebrating the hope that God gives as a result of addressing it, humankind is wired to corporately attend to such matters. Sacred Assembly gives us that opportunity. It’s an attempt to tap into what the saints of old understood through the divine revelation of God as seen in the Old Testament Scriptures. There is a time to blow the trumpet in Zion! There is a time to call people to attention and to sober, collective, and reflective activity. And we call that time Sacred Assembly.

Churches in the liturgical tradition have normal rhythms that could easily be understood as a form of Sacred Assembly. Lent, which starts this year on February 17, is one of those times. In that case, and in the special ones we see in Scripture like 2 Kings 22, 2 Chronicles 29, and Nehemiah 8-9, there is the collective gathering of God’s people to deal with the past and move forward with God’s blessing into the future.

We all believe that Prairie Hill Evangelical Free Church has had a wonderful past, and we’re also optimistic about its future. The goal of gathering with the sacred assembly known as the church in Sacred Assembly is to help make that a reality. To that end, let’s pray and seek the face of God.